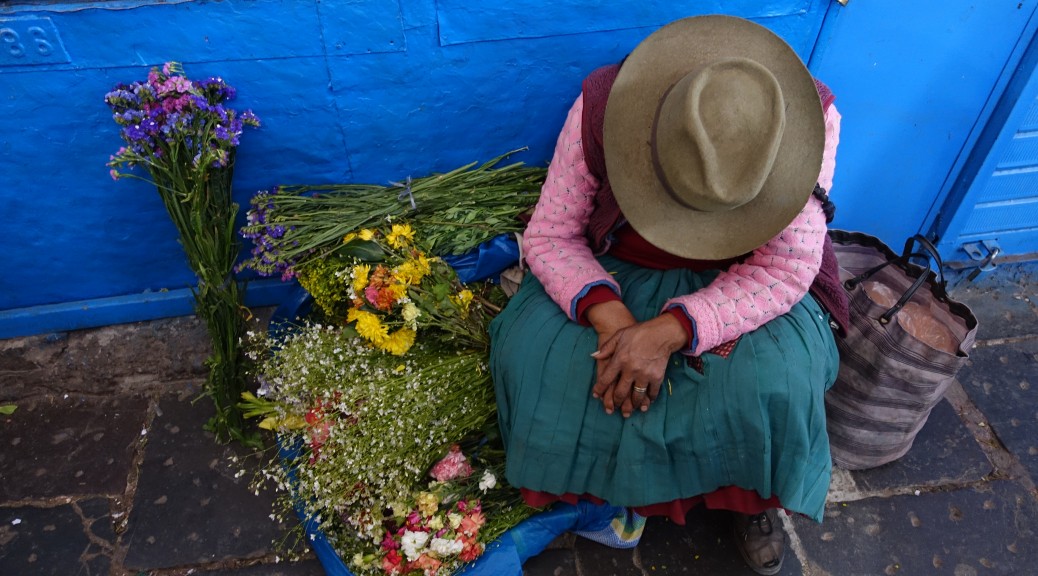 Today we left Cuzco…..it was another very early morning in order to catch our 9:30 flight to Lima. (Although we will have been to Lima three times on this trip never once did set foot in the city…..always catching a flight to another place) As a footnote the mornings and evenings were quite cool in Cuzco. Always needed jackets and sweaters. So this morning we were picked up by our guide Janet and our driver Willie to transfer us to the airport. I would like to take the time to mention that our guides were amazing. Our team of guides consisted of our driver Willie; the team coordinator, Janet; and our faithful companion, Eynor. The Sacred Valley and Machu Picchu would not have been the wonderful experience it was without Willie and especially Eynor. They became our family in Peru and treated us with such warmth and respect. I will send photos on a separate blog……They deserve a blog all onto themselves.

Once again in the airport we boarded our flight to Lima and then once in Lima we boarded another flighty to Quito. It turned out to be another long day of travel, which none of us were quite prepared for. We hadn’t set up that expectation for Gianluca so he found it to be a tough day. (I have to agree with him.) It was very confusing at the gate because the gate had not yet been confirmed and there were a lot of travelers waiting at the gate that had been assigned to our flight, but it had a different airline and time posted. Also, there was not a screen with the departures listed on it, so we just had to listen for the gate assignment. We met and started speaking to a young couple from the U.S. who were traveling through South America. They were on the same flight and every once in a while he would get up to listen to the announcements and he came back with no new info. So Steven said I think I will do some reconnaissance and he quickly comes back to let us know that our flight is boarding! We may have missed that one! Once in Quito, Ecuador (the capital of Ecuador) we of course had to go through immigration…..a long line and Gianluca was really feeling sick. Nothing you can do when you are in that line. He found that pacing back and forth was a way to manage how he felt. The color returned to his cheeks and the red left his eyes….he had managed to recycle and ground himself. Once through the long line we found our luggage got water and were quite happy to be off of airplanes and on our way out of the airport!!!!

We met our next guide Diana who got our van and got us on our way to Quito. The good news is that there is a new airport in Quito, (about 15 months since it’s opening) the bad news is that it takes forever to get into the city. So there we are at 4:00 in the afternoon in rush hour traffic finding our way out of the country into the city with all the other Ecuadorians. We learned quickly that they do not have emissions standards on their vehicles and the fumes make you want to pass out……ha! Then we learn that in order to get to Quito we have to cross a bridge which is completely insufficient to manage the traffic in and out of the city. So the traffic is stopped, the fumes are fuming, the sun is hot, the traffic is at its height and we are so wanting to be at our next hotel. (They are constructing a new bridge that is scheduled to open December 15 of this year. So if you are planning a trip to Quito wait until after the New Year!)

Finally we arrive at our hotel, a Marriott, which was actually nice. We quickly go to our room and try to settle in. We don’t’ unpack as we have to be ready to leave by 7:00 the next morning. The registration for the boat trip starts at 6:00 am the next morning and goes until 7:00am. The clincher is that we had to have all of our luggage outside of our door by 5:30 am. So the reality sunk in that we had to be ready to go by 5:30 the next morning…groan! Fortunately I had taken the time to really organize all our luggage in Cuzco so that what we needed was on top so the getting-ready was easy to do. (Thank goodness for me!!!!) Going back to the afternoon we arrived, once we made it to our room Gianluca does not want to move…he has Wi-Fi and just wants to get on his computer and watch his shows as he knows that he will be on the internet wagon (withdrawal from connectivity) once we get on-board. Steven and I, with Gianluca’s blessing) take a short walk in search of an ice cream cone! We saw someone eating one in the lobby and thought we could find one in the hotel. No such luck. With a bit of help from doormen and drivers we ascertained the name of an ice cream place…..now we just had to find it. It is called Waffles and Cones. After a few wrong turns we came across it. It was wonderful. A huge restaurant/ice cream shop. The handmade waffle cones could be filled with 3 dozen different flavors of gelato. Very fun and good and necessary after that long day.

That night we had dinner in that restaurant in the hotel, The Hacienda, an Argentinian Steak House. It was actually really good. Great dinner and dessert and then into bed for the “evil” early wake up call.